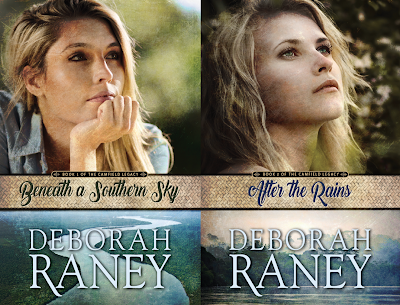 The Camfield Legacy Novels, Beneath a Southern Sky and After the Rains, have been optioned for film by actress-director Francine Locke and ElFilm Productions. (You may recognize Francine from "Stand Your Ground" and the "Nashville" TV series.) The script for Beneath a Southern Sky is complete, co-written by Lori Marett and Kay Mortimer.

My talented husband, Ken Raney, is re-releasing some of my older titles through our Raney Day Press. I'm so grateful for his management skills (I can be difficult to manage!) and for his design of these beautiful new covers for novels that have been essentially out of print for many years! It's wonderful to see these stories get a new life in e-book, print, and in many cases, audiobook as well.

The first three books were also published as part of a Guideposts Book Club series.

"...Raney captures all the nuances of today's family and delivers it up with signature warmth and humor." ~ an Amazon reviewer